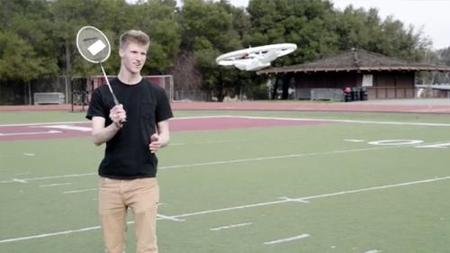 There are some great ideas out there from time to time, although these might need more than just talk to get it off the ground. In fact, pooling resources from various interested parties would go some way to help – and this is where the crowdfunding concept has taken off in a rather big way. Well, the Zyro DroneBall can be said to be a rather interesting idea which has appeared over on Kickstarter, where it is touted to be a smart ball (these days, anything that needs to be able to “sell” in the world of consumer electronics do seem to need to come attached with the word “smart”) that is also the first to interact with multiple players or drones and react like a player.

How so does it work? Well, the Zyro DroneBall will be able to hover, zig and zag within a virtual arena that has been programmed by Zyro. Although the quadcopter base might be easily recognizable by those in the drone scene, the Zyro DroneBall actually looks and moves a whole lot more differently because it was designed specifically to play games and sports. Apart from that, it also doubles up as the puck in hockey, the ball in soccer, the frisbee in ultimate, or as an extra player on the field.

All of the above “roles” do seem to be rather difficult to grasp at first, but here is the nitty gritty of it – the Zyro DroneBall’s wireless networking would enable players to choose a game via the app on their smartphone. In other words, it is akin to playing with the Nintendo Wii or PS4, except that this is in real life and in the air, all without the need for a screen at all. Depending on the ball and the field chosen, Zyro will pick the right kind of swinging or passing moves as it reacts against the players on the ground. In other words, Zyro hopes to be an adrenaline rushing, interactive, outdoor gaming experience. Any takers for this truly unique sporting/gaming experience?

2 thoughts on “Zyro DroneBall is a multiplayer, multidrone aerial ball”