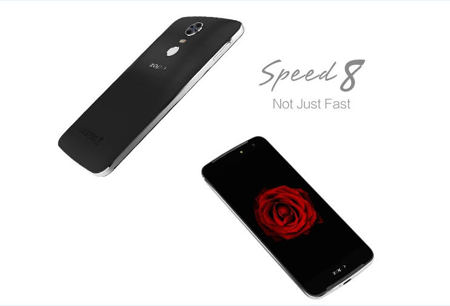 Yes, Mobile World Congress 2016 that is happening right now in Barcelona, Spain, is full of surprises as well as expected devices that were launched, and this is not something strange or unheard of. After all, it is a platform where various companies would love to showcase what they have to offer to the masses for the year ahead. While we have had companies like Samsung reveal their long awaited Samsung Galaxy S7 and S7 edge, do remember that smaller players in the vein of Xiaomi too, have shown off their flagship device, the Xiaomi Mi 5. How about an even more obscure name? Here we are with ZOPO (which sounds like a relative to a lighter brand), with their Speed 8 flagship smartphone that has one main bragging right – the ZOPO Speed 8 claims to be the first deca-core smartphone in the world.

Brand ambassador and MotoGP World Champion Jorge Lorenzo had the honor of introducing this particular smartphone to the masses, and the event happened during a presentation at ZOPO’s booth at the MWC 2016 floor, where media and visitors alike stopped by to check it out. Of course, one is unable to purchase the ZOPO Speed 8 at the moment since it will only be released this coming April 12th, where it will carry a starting price point of $299.99 which is really, really easy on the pockets despite the current economically trying times.

The ZOPO Speed 8 represents the pinnacle of design and manufacturing, and it is also one of the most powerful devices set to be released by the company. It will run on a deca-core Helio X20 chipset, which is also the latest and most powerful MediaTek SoC to date, where the Speed 8 will be accompanied by the likes of 4GB of RAM, 32GB of internal memory, and a 3600mAh battery with fast charging capability. You can also snap some pretty awesome photos with the 21MP shooter behind that has a Sony IMX230 sensor and dual LED flash. In front lies an 8MP camera with its own LED flash, while the entire shebang is powered by Android 6.0 Marshmallow. Other hardware specifications include NFC support, USB Type-C, Dual SIM, a fingerprint scanner at the back, and 4G connectivity.