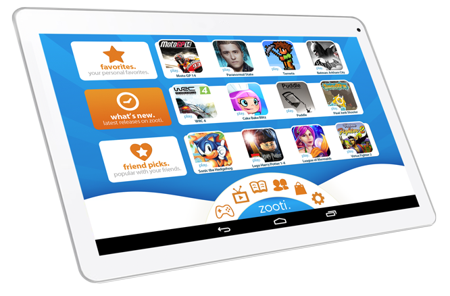 The choice of hardware when it comes to mobile gaming these days are expansive. I remember back when Nokia used to rule the featurephone market (and there were practically no regular, everyman smartphones available other than the bulky Nokia Communicator series), mobile gaming was relegated to the likes of Snake on them Symbian powered phones, or if you want something more realistic and engaging, you would have to settle for the likes of the Sony PSP or the Nintendo Game Boy Advance or Nintendo DS Lite. Having said that, the explosion of mobile devices over the years have seen mobile gaming evolve, with smartphones and tablets being the primary tools of portable entertainment. The zooti.HD tablet intends to jump aboard such a bandwagon by offering a portable cloud gaming tablet experience.

AtGames, the people who are behind the zooti.HD tablet, has launched their zooti cloud gaming service in January earlier this year at CES. This means one will be able to take advantage of the numerous retro-popular Sega Genesis Classic and Atari Flashback titles on the Google-certified Android tablet that they call the zooti.HD. It is no pushover, this tablet – make no mistake about it, since it comes across as a full featured, Android tablet that will include the full suite of Google apps, not to mention a game bundle that contains more than 85 classic Sega Genesis titles.

Apart from that, you can use the zooti.HD to seamlessly stream hot PC games right to the tablet itself. The asking price for the zooti.HD ain’t too high either – we are looking at some change being returned to you even after you have handed over a single Benjamin – talk about a value for money proposition! One can configure up to 6 different profiles to use the tablet, where each of these profiles can be customized with its own access rights, including the likes of daily time limits, content management, and other parental and safety controls. Hardware specifications of the zooti.HD include a 7” display at 1280 x 800 IPS resolution, an HDMI port, and Bluetooth support.