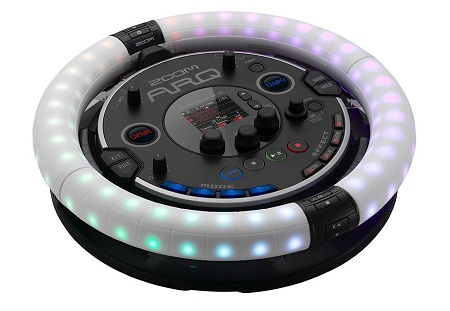 Music is an interesting topic. It’s something that can reach everyone on the planet, regardless of what language you speak, and comes in every form imaginable from folk and classical to wizard rock and 8bit metal. We have access to this wide world of sound through our phones and computers, so going to a concert is now more about experience than anything else. We want to be moved by all-encompassing sound and have visuals that further amplify that feeling.

If you’re a musician that works in the digital sphere, then you know how important it is to have that visual aspect. It adds an extra punch to your bass drops and vibratos. The Zoom ARQ Rhythm Trak is a drum machine, sequencer, synthesizer, looper, clip launcher, and MIDI controller. It has 468 drum and instrument sounds, 70 synthesizer sound types, and can be used wirelessly. Thanks to the accelerometer, you can also change sounds and effects in real time. You’ll be able to give the people what they came for by pressing a combination of buttons, all while moving around freely.

There are 96 pads on the device that are velocity and pressure sensitive, as well as 160 LEDs that can be programmed to display a variety of color. In case it slips, there’s also grip detection so you don’t have any unwanted notes playing at random. This is a $599.99 device that is for digital musicians that want to be able to move around the stage and be in front of the crowd. It consists of the base station, ring controller, and an AC adapter.