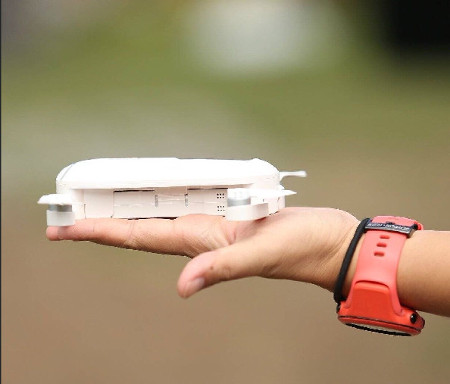 Earlier this August, we did talk about how Zerotech has unveiled the world’s smallest pocket drone that shoots selfies, which is known as the Dobby Pocket Drone. Well, we are glad to say that this particular pocket drone has now made its way over to the US as well as Canada, and with its ground-breaking features stuffed into its relatively diminutive form factor, you can be sure that the Dobby Pocket Drone would certainly be high on the wish lists of many as a present this holiday season.

The Dobby Pocket Drone might be small, but it does have big ambitions. This is a classic case of not judging a book by its cover, where it will be able to capture video in 4K goodness, as well as 13MP stills. Not only that, when you are not using it, it can be folded up and stashed away in your pocket without weighing you down. After all, with a weight that tips the scales at just 199 grams, we are pretty sure that you would not even realize it is there in your pocket when you move about.

The Dobby Pocket Drone is full well capable of flight within a 100 meters from where you are standing (or sitting), and has a maximum flying height of 50 meters above the ground. Packing best-in-class technologies that is now a staple in most of Zerotech’s drones, having garnered all of it from the nine years in the drone industry, the Dobby Pocket Drone will also boast of the likes of professional target following, face-tracking and additional creative functions.

Not only that, it has a 10-second auto pull-away short video and 75 degree no-distortion lens that enable the perfect aerial selfie with your friends and family — all from a bird’s-eye view. Being different from other aerial drones, end-users can then record not only facial expressions but the surroundings as well. Beginners can take to the Dobby Pocket Drone like a duck to water thanks to its integrated tutorials, and allows just about everyone to master aerial photography within five minutes.