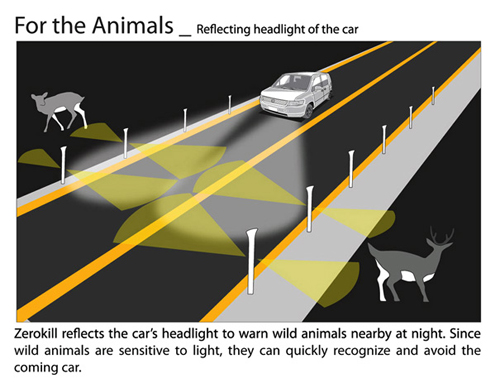 I’ve had my fair share of close calls when it comes to hitting deer, I’ve actually only hit one rabbit.  Considering how many animals I’ve managed to dodge, believe me, that’s an accomplishment.  Anything that would make the odds of hitting an animal of any size less likely would make driving a lot less hazardous for a great deal of drivers.

This solar powered animal warning system charges all day long.  It gives off a subtle blinking LED light that flips on when it detects an animal nearby.  It alerts the motorist so that they can slow down.  It also reflects the oncoming car’s headlights.  It makes it so the light bounces sideways in order to warn the animals and hopefully get them to run the other direction.  Right now these Zerokill reflectors are just a concept by Sungi Kim and Hozin Song.