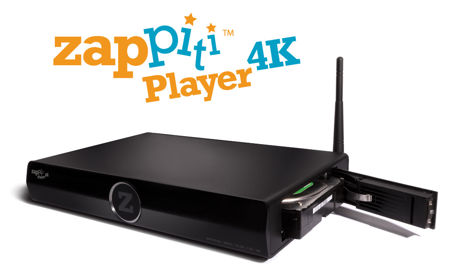 Set top boxes and media players do happen to play a rather important role in the life of couch potatoes all over the world, and so too is the Internet – where none of these are available, you can be sure that said couch potato would most probably die out of boredom first as opposed to hunger or thirst. Having said that, the Zappiti Player 4K is a spanking new Android media player that will not only deliver 4K upscaling technology and Google Play compatibility with your videos, it will also feature a fair number of other functions that ought to keep you and other folks in your living room happy.

First of all, with the kind of media we watch these days coming in ever increasing resolutions, it would make perfect sense to ensure that one is well equipped with the relevant amount of storage – so that you do not have to end up deleting a movie each time you want to download another, simply due to the lack of space. Zappiti knows this, which is why they have ensured that the Zappiti Player 4K will be able to support up to 6TB pre-formatted hard drives – although one ought ot take note that the hard drives are not included, so you would have to do the scouting and shopping for these by yourself.

Apart from that, it is not all just a visual feast, as there is also something for your ears in the form of HD Sound. Thanks to the latest Realtek chipset, the Zappiti Player 4K will be able to take the sound quality over the top. There are many popular HD audio formats out there at the moment including Dolby TrueHD and DTS-HD which are supported, in addition to the new Dolby Atmos in full bitstream. Hence, you can be sure that your ears cannot thank you profusely enough for being able to enjoy such unbelievable sound detail.

In addition, it supports Ultra HD 4K files as well, where this is the future, taking into consideration how Ultra HD 4K resolution is equivalent to 4 times 1080p. Anyone interested in shortlisting the Zappiti Player 4K as your next big ticket item purchase?