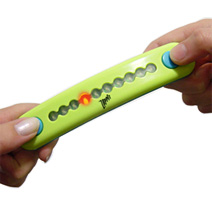 Following the KISS concept to the letter, Zappit is a simpler version of the classic pong, there’s no need to move a bat just hit a button.

Zappit is a two player game that tests the reactions. One player serves which sends a red light over to their opponent who must hit the button at the exact time the light reaches them to send it zapping back, play continues until one of the players hits the button too early or late (first to five wins). Over time the light moves faster and faster adding to the difficulty.

I can see this having pong addictive qualities but for how long is anybodies guess. Zappit costs £9.95 from gadgetshop.