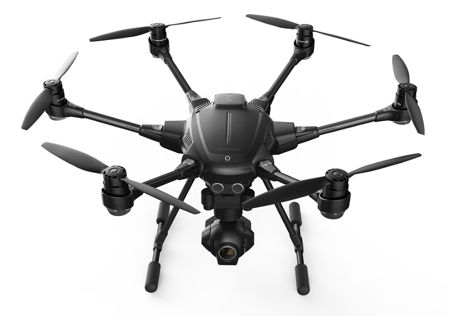 Drones seem to be dime a dozen these days, as there are plenty of different models out there in the market, so much so that it can be rather challenging trying to keep up with which particular model is the next big thing that will arrive and make a splash. Having said that, how about ensuring that each new drone model that comes out would be better equipped than the last, bringing along with it an evolution in form and functionality? That is what Yuneec of China has done, where they have expanded their Typhoon series with the unveiling of the Typhoon H. The Typhoon H happens to be a new category of drone for the enthusiast, where it offers capabilities that were previously found only in high-end professional offerings, all without breaking the bank – relatively speaking, of course. We are talking about the Typhoon H sporting half a dozen rotors, a 360-degree gimbal camera and retractable landing gear, all retailing for a recommended retail price of $1,799 a pop.

The 360-degree gimbal with the new CGO3+ camera would pave the way for unlimited panning in order to deliver breathtaking 4K videos alongside 12 megapixel stills. Not only that, the landing gear itself can retract during flight in order to have it seamlessly remove itself from the shot for unobstructed views, now how about that for a truly smart drone? Not only that, the Typhoon H will also introduce new flight and image capture modes including Point of Interest, Orbit, Curved Cable and Journey. Some of the other innovative new safety features include ultrasonic proximity detection to assist in avoiding large obstacles, and a failsafe system which allows Typhoon H to remain stable and land if a motor should fail.

The Typhoon H will be controlled by the Android-based ST16 controller, which sports a large 7-inch integrated display and HD 720p video downlink for stunning real-time video reception.