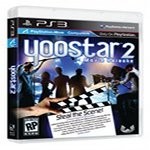 Some of you might remember when we first reported on the Yoostar, and you should know that its sequel was introduced at E3.

For those of you who aren’t familiar with Yoostar, it is a device that has a portable green screen and stand, and uses an ordinary web camera to literally put the user into a scene of a popular movie.

Yoostar 2: Be Scene allows the user to download even more scenes from even more movies, and then play a game where they are required to match the lines of the actor or actress precisely. Leonard Nimoy was at E3 demonstrating this technology as he quoted Arnold Schwarzenegger’s famous “I’ll be back” line from the original Terminator. By the way, he did a pretty good job. I guess years of playing the stoic Spock prepared him for acting like a robot with human skin.

After the player has his or her “audition”, he or she is rated as a “struggling actor” or “superstar”. There is even a multiplayer mode and progression mode as well.

The Yoostar 2 is planned to be released soon, but we don’t have a price or exact date. However, it will be compatible with the Microsoft Kinect and the Playstation move. We also know that players can record and then upload their performances to Xbox LIVE or the Playstation network as well.