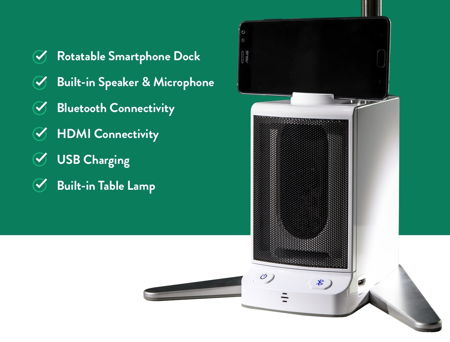 A company known as Yinscorp has just introduced the Count Projector, and this is no Sesame Street toy. In fact, the Count Projector is actually a desk lamp that also doubles up as a projector platform which is able to transform your regular smartphone into that of an interactive augmented reality (AR) projector. This innovative pico projector and LED desk lamp multi-function platform is all set to launch on Kickstarter, where it will retail for $699 at retail, although those who have faith in it on Kickstarter can enjoy up to a whopping $290 discount.

There is a fair number of product applications that one is able to take advantage of this compact projector here, where among them include African Animals: The Match that is an AR playing card game which will allow users to summon the animals on the cards, followed by interaction with them, all the while learning about their daily lives with the ability to pit battle against their friends. As for “The Amazing Show Director”, users can color a character on paper, record voices, and narratives in order to conjure a story. The Count will then play the story based on the animated character of choice.

Want to pick up a new language like English? That is easier done than said with “Padkaka”, where scanning the toy cards will then enable Count to playback the associated videos which in turn teaches children English vocabularies. Forget about old school pop up books, those were fun, but in the 21st century, enter Drake’s Lesson. Drake’s lesson might seem like a regular pop up book, but opening it up will enable the reader to interact with the animated projected characters, allowing children to learn the importance of sharing and playing nicely with others via an engaging, multi-journey adventure story.

The Count Projector is no regular projector, that’s for sure, and will surely be worth checking out for any parent who would like to see their child embark on a whole new learning adventure.