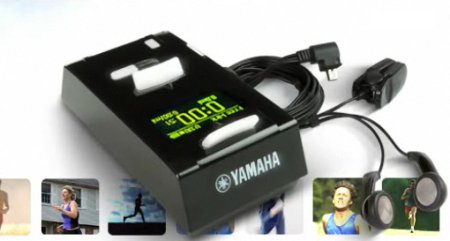 Yamaha has finally taken up the task to ship it’s BODiBEAT device that threw up quite a storm when it was first unveiled. Just to recap, the BODiBEAT prides itself in being the first music player in the world that is able to select songs that match the pace of the user’s workout. This is made possible by synchronizing automatically one’s musical selections to the steps of the user’s walk or run. I wonder what happens when most of the songs are of the same beat, will the software tear its virtual hair out in frustration due to being unable to find a match? I would normally think that once a person’s workout pace drops, it is imperative to pick up that lost pace by increasing the speed of music and not the other way round, but I won’t argue with Yamaha on this point.

BODiBEAT comes with BODiBEAT Station, software that automatically categorizes each downloaded song by beats per minute (bpm), and a small heart rate monitor that clips gently onto the user’s ear. Designed to maximize fitness activities such as running, walking and dancing, BODiBEAT also tracks the metrics of these workouts, including distance, time, pace and heart rate. BODiBEAT includes an armband and is ergonomically designed for ease-of-use and exceptional comfort during active pursuits. BODiBEAT features 512 megabytes of skip-free internal flash memory, and offers approximately 12 hours of playback when fully charged. BODiBEAT has four main operating modes: Free, Fitness, Training and Music. In Free mode, BODiBEAT automatically matches the music to the exercise pace, selecting songs that mirror the tempo of the user’s jogging or walking speed. Fitness modes include Walk Fitness and Jog Fitness, each of which works in conjunction with the heart rate monitor to select the most appropriate music for optimal aerobic exercise at the user’s fitness level. Like a personal trainer, Training mode tells users when to speed up and slow down for ideal results, and it does so while playing their favorite music. In Music mode, BODiBEAT functions as a standard portable audio player.

The Yamaha BODiBEAT can be yours for $299.99. Expect to see these appear in gyms pretty soon.