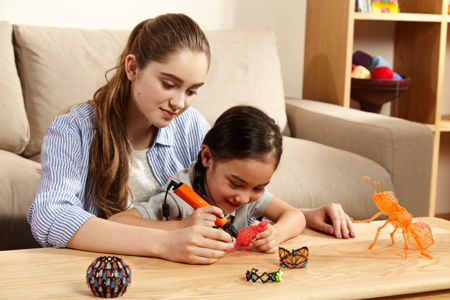 3D printing is one particular niche market that has its fair share of fans, and it does not look as though the hobbyists who are furthering this particular cause are about to back off anytime soon. In fact, it looks as though the home 3D printing market is going to continue ahead with a boom, and there will be many different kinds of tools that continue to surface from time to time. XYZprinting is one such company, having revealed its latest device, the da Vinci 3D Pen which is said to be able to allow users to explore new possibilities.

This is their very first attempt at a 3D pen, which will naturally work alongside its new da Vinci Jr. 1.0 3-in-1 3D printer. Being a world leader in desktop 3D printers, XYZprinting intends to enter the 3D pen market through the introduction of the versatile XYZprinting da Vinci 3D Pen. The asking price for the da Vinci 3D Pen stands at $49.95 a pop if you were to purchase it from Amazon, and this unique 3D pen would allow freehand creations at a low cost without the need for a computer or complex software.

Specially developed with artists, designers, DIYers, hobbyists and educators in mind, the da Vinci 3D Pen is virtually limitless in its creative powers. Basically, your imagination will limit the degree of how much the pen is able to be used, as it has been created with a strong focus on personal projects, small crafts, home repairs and educational purposes.

Simon Shen, CEO of XYZprinting and New Kinpo Group, shared, “The release of the da Vinci 3D Pen has meaningful implications for the future of 3D printing and consumer technology overall. 3D printing technology is becoming more attainable for the average user who can now access advanced technology at a reasonable price.”

Being compact in form factor that also makes it mobile, it offers a simple making experience. All that you have to do is to push the button, and the non-toxic, biodegradable PLA filament will pass through the heated tip of the pen in order to create a malleable line. This then cools quickly so that pen users are able to build upon their 3D designs in a matter of minutes.