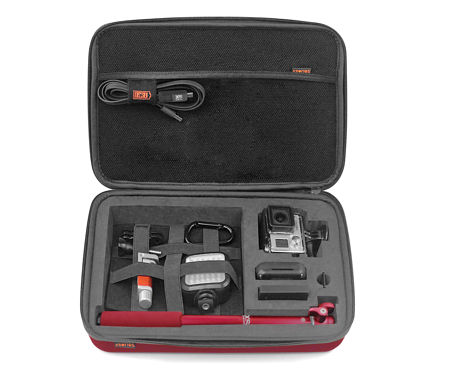 Looks can be deceiving, and it should be noted that we should not judge a book by its cover – and in the same vein, we should also not pass judgement on a particular piece of hardware based on how it looks like from the outside. Having said that, XSORIES, a name that we have come across before, is pleased as punch to deliver what they deem to be the ultimate accessory for amateur photographers, videographers and adventures – and then some. I am referring to the Large Power CapXule, which comes across as an innovative storage case which will boast of a 2,800 mAh onboard power bank that will come in handy to deliver both power and organization for artists who are constantly on the move.

The Large Power CapXule’s built in caribiner will allow you to clip it to any backpack, which in turn would make this to be the perfect solution for carrying the entire camera kit without breaking a sweat, doing so in style and ease. Apart from that, it must be noted that the 2,800 mAh onboard battery will carry enough juice to power up a pair of GoPro batteries (or a single battery twice), where you can also opt to keep a second Battery BacPac fully charged, or perhaps even to team the power bank up with the GoPro Dual Battery Charger and ensure that a pair of batteries will remain fully loaded and ready to go as and when required.

It is imperative if you are an avid shutterbug to pick up the Large Power CapXule, since it will be able to offer effective storage for the entire slew of your expensively assembled camera gear. Fret not about the components’ safety, as numerous secure foam compartments, in addition to a dedicated GoPro slot, will keep things safe and sound. The Large Power CapXule is, to put it simply, a multi-functional case that offers peace of mind when it comes to your gear storage, where it will be accompanied by a $79.99 price tag.