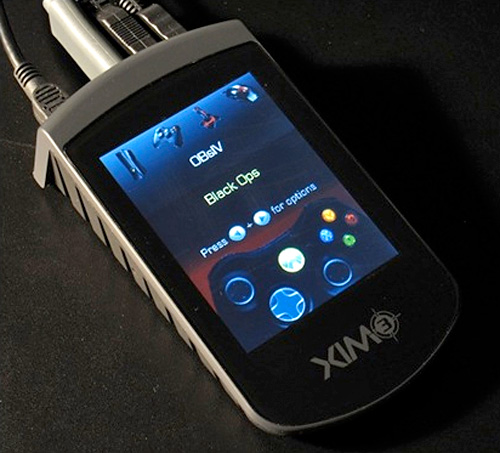 Clearly, I need to get an Xbox 360, because I don’t really even know what this thing is. Maybe I need to grow out of my Nintendo Wii.

Anyway, this is the XIM 3 from XIM Technologies, and the purpose is to make it possible to adapt a keyboad and mouse for the Xbox 360. It is good for those who enjoy playing FPS games on their XBox 360 in a PC fashion. By the way, XIM is an acronym for XBox Input Machine.

The XIM3 is able to use “Smart Translators” to create a unique feel and control for whatever Xbox 360 game that you are playing. There should be a 1-to-1 movement between these controls and your game, according to my Source.

As you can see, there is a simple configuration with an on-board full-color LCD screen, and it has upgradeable firmware and an active community forum.

The XIM3 allows a gamer to choose input devices that will suit them best, and the hardware compatibility is not just for keyboard and mice. It also supports devices like the Logitech G13, a gaming keyboard with a built-in thumbstick.

I just checked on the XIM3, and it doesn’t seem to be available now, and prior versions of XIM are apparently no longer in production.