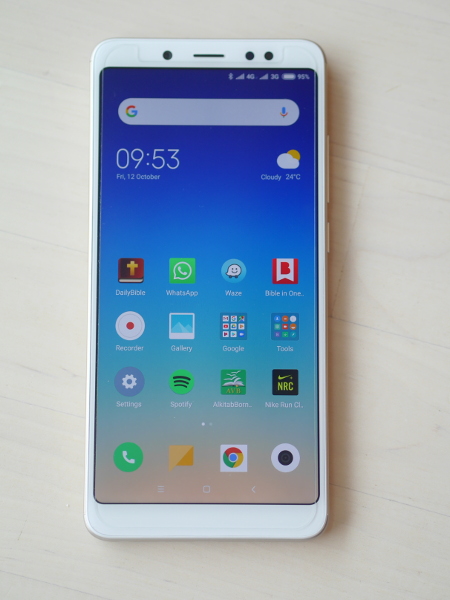 Xiaomi has worked their way to be the 4th largest smartphone manufacturer in the world, and their mid-range smartphones continue to straddle the comfortable level between price and performance. While the Redmi Note 5 is not the newest device on the block in this category, it has aged well over the past half year. Here is a review of the Xiaomi Redmi Note 5 for those who would like a highly functional smartphone without having to take out a second mortgage on their home.

My usage pattern
The Redmi Note 5 screams value for money right from the moment you open the box. There are no headphones included, but it does feature a transparent case and a two-pin charger with a microUSB cable. Powered by the Qualcomm Snapdragon 636 processor, the Redmi Note 5 is no slouch when it comes to performance, and any smartphone that is capable of handling PUBG Mobile without running into lag or a stuttering frame rate is certainly decent enough to be your daily driver.

I would like to provide the right frame of reference concerning my use of the Redmi Note 5 so that readers will have a better idea of what to expect should they decide to pick up the device. As my daily driver, the Redmi Note 5 will provide me with tunes from Spotify for an average of 3 hours each day, not to mention an average of 3 hours’ of screen time. I have Bluetooth turned on to connect to my smartwatch, while Wi-Fi is never turned off so that I can seamlessly drift between my mobile data and home Wi-Fi network. Both SIM card slots are taken up as I sport two numbers, and I also turn on mobile hotspot capability for up to 30 minutes daily.

Design
What is there that can be said about the Redmi Note 5’s design? The updated visual details bring the handset up to par with what a modern day smartphone should look like, where the 18:9 display makes an attempt at a minimal bezel look, pulling it off decently. However, the top and bottom bezels are still fat when compared to the flagship devices that are in the market, but that is to be expected.

I like the feel of the metal chassis that exudes a breath of style and elegance, but the major downside would be the slippery feel even though my palms barely sweat at all. I would strongly advise purchasing a third party protective case in order to enjoy a more secure grip each time you use the smartphone. Despite packing in a beefy 4,000mAh battery, the Redmi Note 5 remains surprisingly light and slim, which is a good thing.

At the back lies a fingerprint sensor that is easy to access with one’s index finger, and it performs with relative accuracy that makes it far more convenient than typing a passcode or forming a pattern to unlock the device. The 3.5mm audio port and microUSB port are located at the bottom of the device, which is a far better design idea than its predecessor (Redmi Note 4) which places the 3.5mm audio port above while the microUSB port is at the bottom, especially when you are charging the handset while listening to your favorite tunes.

It would be nice to see the Redmi Note 5 migrate to USB Type-C though since it would help elevate the device to a more premium standing in terms of perception.

User Experience
Xiaomi’s handsets run on MIUI, which is skinned on top of Google’s Android mobile operating system. With MIUI 9.5 arriving right out of the box, you would do well to perform a system update and enjoy all that MIUI 10 has to offer. It does not feel bloated, and the Snapdragon 636 processor is more than capable of handling all swipes and interactions without any kind of slowdown. If you are a first time owner of a Xiaomi device, the learning curve is not steep at all and extremely easy to pick up.

My eyes did not find any issue with the 5.99-inch 18:9 Full HD+ display that delivered an acceptable degree of brightness for its price point, while colors remain vibrant. This makes the Redmi Note 5 above average in its visual department, be it for gaming or watching movies.

I also find the built-in 4,000mAh battery to be extremely useful since I no longer have to charge the handset halfway through the day. In fact, with my described usage pattern, I am able to push it all the way to one and a half day’s use with reserves to spare before plugging in the charger. The Redmi Note 5 also supports Quick Charge 2.0, but you will need to purchase a separate charger that caters to that feature.

Arriving in two flavors of 3GB RAM and 32GB of internal memory and 4GB RAM and 64GB of internal memory, you might want to settle for the latter as the lack of a dedicated microSD memory card slot might mean making a sacrifice of one SIM card slot just to fit in your microSD memory card. Again, a lot of it depends on your usage pattern, so do think things through carefully before making a purchase.

Camera
There are dual rear cameras in the Redmi Note 5, comprising of a 12MP f/1.9 primary shooter and a 5MP f/2.0 sensor. The latter will help capture depth information so that better looking portrait shots can be taken. The 12MP sensor itself is impressive as it boasts of a large 1.4μm pixel size, enabling it to absorb even more light to deliver above average shots in low light conditions. However, there is no optical stabilization for a handset at this price point, which would mean grainy and blurred shots are part of the deal under less-than-ideal situations.

Do be aware that there is some lag when booting up the camera app, although it seems to happen randomly. Still, this is an irritating quirk that I hope Xiaomi will be able to weed out with a future software update, as some moments are lost within seconds. Apart from that, there is also a noticeable shutter delay in between shots at times, especially when I tried to capture images under low-light conditions.

In terms of picture quality under adequate lighting, the Redmi Note 5 performs admirably for a device in its class. There is also a 13MP selfie camera in front, and while both the front and rear cameras are able to capture portrait shots with the bokeh effect around the subject, the dual rear cameras do it better due to the secondary lens.

Conclusion
If you want an everyday workhorse smartphone that gets the job done quietly and without having to pull attention to yourself, the Redmi Note 5 is certainly worth exploring. However, those who always want to be on the cutting edge of technology would do well to give this a pass and aim higher up the smartphone food chain.