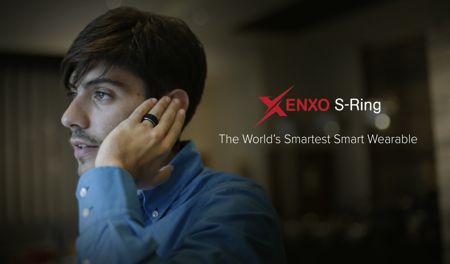 So you have smartphones and smart watches to go along with your everyday dressing, but what about fancy jewelry that will be able to help enhance your looks? Why not throw in the idea of a smart jewelry? This is what the Xenxo S-Ring intends to do, being a fashionable smart wearable for the year ahead. It might look great, but it is not going to break the bank, as the Xenxo S-Ring is said to be budget-oriented, making it suitable for every segment of society, while hoping that it will be able to take off in a big way.

The brainchild of Rajmall Inventives of India, the Xenxo S-Ring is said to be an achievement in itself. After all, it claims to be astonishing in its looks and unparalleled in terms of design, cost, and technology that has been thrown into the mix. The development team behind the Xenxo S-Ring claims that this masterpiece of theirs is going to provide a whole lot of value to the industry as well as to the world around us. In a nutshell, the Xenxo S-Ring will bring together over a dozen features of six accessories into a single device, merging the performance and customization needs of the consumer in the market.

It is claimed that the Xenxo S-Ring offers a wide-ranging solution to the modern day road warrior, being a smart wearable that will eventually help phase out everyday accessories such as the Bluetooth headset, USB flash drive, a fitness tracker, an access card, a digital wallet, and one’s home keys. A single click and press on the Xenxo S-Ring will allow the user to receive calls directly, as well as to make calls to the selected numbers from the S-Ring itself while carrying out a conversation without any interruptions. It should not cost more than $250 by the time the Xenxo S-Ring hits the market, but only time will tell whether it is going to take off in a big way or not.