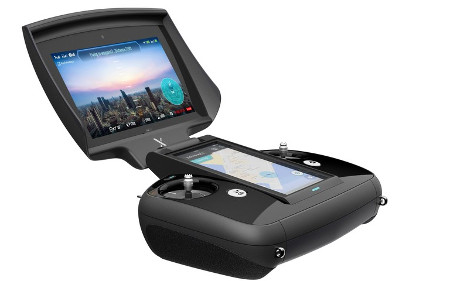 Owning a drone is no big deal these days, which makes us wonder just which particular feature that will be incorporated into drones of the future will be the one that gets everyone all interested and drooling over. XDynamics is preparing themselves for the coming CES 2017, with the announcement of a brand new drone which will boast of a dual-screen controller.

Touted to be the world’s first smart drone that sports such a unique controller, it does make you think whether the designers at XDynamics were inspired by Nintendo’s 3DS in the first place. Known as the Evolve, this is the first consumer drone in the world that has a patented dual-screen remote controller. With two screens available for you to work with, surely there will be more options in terms of controls that are available, right?

This unique remote control will be supported by a processing powerhouse alongside built-in software that will take advantage of both screens. These two screens will be luminously visible and are perfectly operable even when you are playing with the Evolve under direct sunlight. There will be a 7” viewfinder function for one, with a 5” multi-touch control panel serving as the other. This foldable dual-screen controller will also be complemented with minimal buttons and sticks, ensuring that you start off with an intuitive experience right from the get go.

It does not matter whether you are a professional or an amateur, the Evolve’s app will feature an album manager for easier sorting out and organizing of photos and videos, being an alert center that lets you check out the drone’s status at a glance. Flight modes will even let you snap selfies as the Evolve follows you, or to create a scene whenever it flies along user-selected paths. The remote controller itself is powered by a 64-bit quad-core CPU, has a dedicated GPU, 4GB of RAM and Android as the operating system of choice.

There is no word as to when the XDynamics Evolve with 4K camera will be released, and how much will it cost, but it ought to debut early next year.