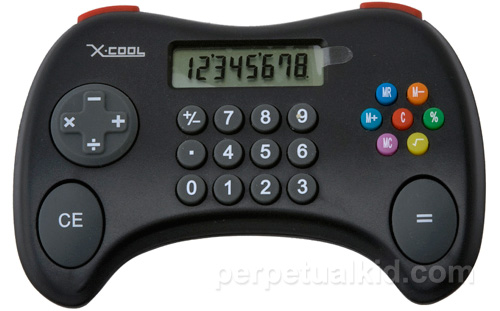 Do you remember the day when a calculator was a separate tool from your cellular phone? Man, I can still remember the days when pocket calculators were expensive. They were really big back in the late seventies when the tech got small and cheap, but I highly doubt there is a big market for them now.
This particular calculator is known as the X-Cool, and it is a very obvious attempt to make math look cool by turning this calculator into a mod of a video game controller. The fact that the calculator has X in its title is a definite indicator of the X-box 360 controller that it is similar to, but it has the color of a PS3 one.
I like how the addition, subtraction, multiplication, and division signs are on the left, where a movement joystick would be. Then all the other keys are where the firing would be. I have no idea what the “bumpers” do, but I like where the CE and equals keys are placed. As for the numbers, that’s probably where they belong.
So, whether you are a math nerd or a gaming nerd, this would be the calculator for you. You should be able to get it for about $13.99.
Source