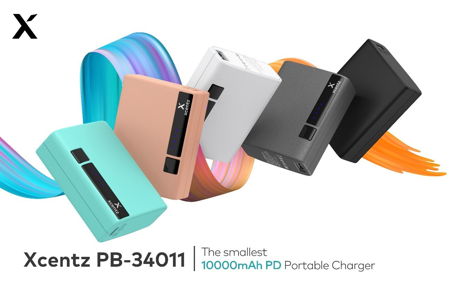 This is made possible courtesy of it having the industry’s highest density battery that containing more than 21,700 cells from LG Chem. This alone guarantees an abundant power output that will be able to support bidirectional Type-C PD fast charging alongside PD/QC3.0 full protocol fast charging technology. Not only that, this particular unit also happens to feature the smallest portable power supply in the industry with a form factor that is half the size of conventional portable power packs, now how about that for ultimate portability? To further sweeten the deal, the power unit boasts of several color options to keep potential buyers interested.

With the advanced high-density cell running the PB-34011 from within, it is able to achieve high power output and high-current fast charging. Supporting a wide range of fast charging requirements, the PB-34011 plays nice with PD/QC3.0/intelligent identification IC and bidirectional PD charging. Newer smart devices will be able to be charged faster thanks to output power of up to 18W. As an example, the iPhone XR is able to achieve 50% of its capacity in a mere half hour via USB-C. In terms of safety, the PB-34011 boasts of over ten safety protection features: overvoltage, over-current, over-temperature, overload and short-circuit protection as well as self-matching for added peace of mind.