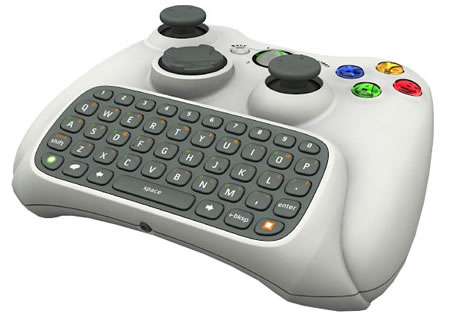 This looks to be a little on the large size, as Microsoft have attempted to cram everything into on controller.

The Xbox has competition from the PS3 and Wii yet have these machines really made any dent into the Xbox sales? It is far to early for sure, yet Microsoft do appear to be consolidating the Xbox accessories and software market now, there is a rumor that they are looking to take over Take Two, the software house that creates the GTA series amongst others, is this a play to prevent future GTA games coming out on the PS3 format in favor of the Xbox?

Back to the controller, it is designed to work with the new chat features on the Xbox’s dashboard coming out later in the year, having keyboard with a qwerty type layout will make it easier to write messages etc and therefore enable users to use the chat features a lot more easier than ever, the controller also has its own headset and the keyboard itself is also illuminated for those late evenings.

The controller is large and looks to be on the heavy side yet in its own way is unique and very usable, and as MSN messenger is now available via the Xbox, it makes perfect sense to provide a way of communicating fast and easy, the controller does this and for that reason will probably be a great hit when it comes out in the summer, however unfortunately there is no details on prices etc, which is a shame but we should not have to wait that long to find out more as the Xbox dashboard update is due take place on May 7th . Maybe after then things will be made clearer.