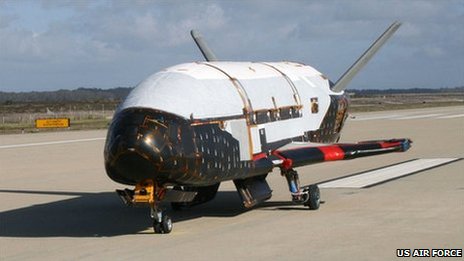 We really do live in a very science-fiction age. It would appear that the X-37B US military spaceplane has taken off and landed after seven months in orbit.

In all honesty, I don’t understand why this is the first time I am hearing about this. However, this project has been under “top secret” classification, but thanks to leaks (not Wikileaks) we know about it now.

It was launched on April 22nd at Florida’s Cap Canaveral Air Force, and landed a few days ago at Vandenberg Air Force base in California.

Yes, we can send up an automated space vehicle, and have it come back home again. I know you can’t get a good size of the spacecraft with this picture, but the X-37B is less than 30 feet long, and about 15 feet wide. That is one-quarter the size of the space shuttle.

Since this is a test run of the shuttle, it is not really known exactly what it is supposed to do. According to my Source, some have feared that the X-37B could be used for the “weaponisation of space”, but that doesn’t seem to be on the agenda.

Whatever the case, the X37B clearly must do whatever real human astronauts must do, unless they want to use the X2 robot program.