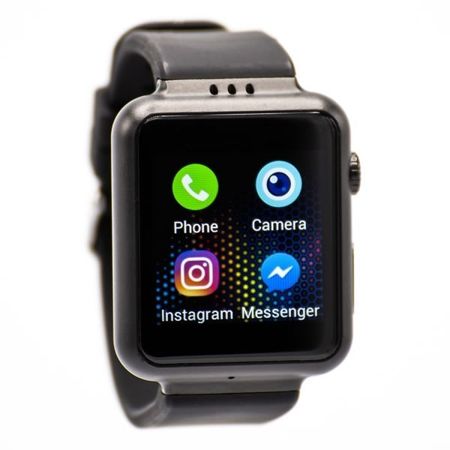 Owning a watch does not seem to be enough these days, as a smartwatch happens to be the preferred alternative for road warriors as well as those who are on the move and would like to remain connected at all times, all without having to refer to their smartphone frequently. The X1 Watch fits the bill perfectly then, as it runs on Android 5.0 while functioning as a full featured smartphone. Definitely taking the route that is less traveled, the X1 Watch might not have the latest Android operating system running on it — in fact, it is several generations behind, but then again, a normal smartwatch lacks the kind of hardware capability to do so.

Apart from being powered by Android 5.0, it is also a fitness tracker in order to deliver more than just smartphone functionality on your wrist. In fact, one can boast of it as being the smallest smartphone in the world, or the most powerful fitness tracker worldwide as well. All that you need to do is to insert a working SIM card in order to gain access to data, cellphone capability, text messaging and email functions. Since it will not require any Wi-Fi network, you save further battery life as the X1 Watch has no need to be tethered to a smartphone or remain hooked up to a Wi-Fi network.

The X1 Watch is a fully unlocked, open source device, and it comes with 23 languages pre-installed to help most people get started with it right out of the box. It will function on virtually any cellular network in the world, and one can also download apps such as Messenger or Skype in order to perform live video calls, and with millions of available apps in the Google Play Store, one can customize the X1 Watch to one’s liking. The 2MP camera is decent enough for selfies and social media updates, while Wi-Fi and Bluetooth connectivity makes it easier to hook up to other external devices.

The X1 Watch will carry an asking price of $295 apiece and is certainly extremely affordable for everyone.