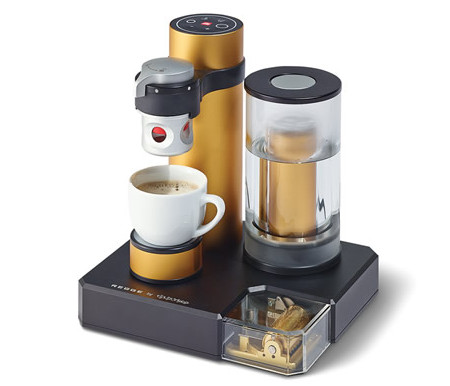 The idea of convergence devices are pretty cool – it helps you save in terms of money as well as time, as there is one less item to tote around if a single device is able to do more than one task or perform more than a single chore, right? The modern day smartphone is an excellent example – it is a mini computer of sorts, a clock, a camera, a navigation device, and heck, even a flashlight, all without forgetting that it was created to help us keep in touch with one another. If you would like something different in the kitchen while on the lookout for an espresso machine, then the $4,200 Music Box Espresso Machine would certainly be the perfect fit for the bill.

The Music Box Espresso Machine is the world’s only device of its kind, where this Swiss-crafted heirloom will be able to produce regular espresso or long-pull espresso accompanied by mellifluous music. It is a Hammacher exclusive, and it is the combined effort between Reuge—renowned horologists since 1865—in Sainte-Croix, Switzerland, which is also considered to be the birthplace of the mechanical music box, and KISS, the elite Swiss coffeemaker manufacturers. Created using anodized aluminum, the machine accepts your preferred (and widely available) illy iperespresso flavor pods, with the ability to make up to 10 cups of 1-oz. espresso shots or five 2-oz. long-pull espresso shots from the integrated 10-oz. water tank. It rolls out 11 different 36-second musical selections which will match the brew time of a cup of espresso, where among them include Vivaldi’s The Four Seasons, Mozart’s The Magic Flute, or even Deep Purple’s Smoke On The Water.