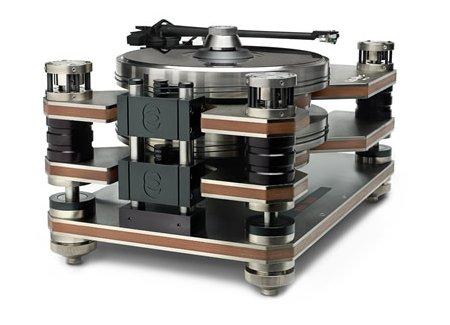 If there is one thing special about the folks over at Hammacher, it would be the way they describe some of the bevy of devices that they have in their warehouses. Hammacher tends to make use of superlative adjectives, and for today, we have one which is accompanied by a whopper of a price tag. I am referring to the $28,000 World’s Only Counterbalanced Turntable, yes sir, we are looking at 28 grand of goodness here just to play back your music in a traditional manner as you appreciate the vinyl records of yore (and new ones, too).

Touted to be the only fully suspended turntable in the world which relies on the wonders of dual counter-rotating platters so that it eliminates the troublesome sonic aberrations that are generated by common consumer models, this particular model has also picked up the gong for the Best Sound High Fidelity award from the renowned Munich High End, which is the largest high-end audio show in the world.

During playback, a vinyl record will rest atop the top-most, clockwise-spinning platter, while the bottom will rotate counter-clockwise in order to cancel torsional forces which would otherwise result in fluctuations in rotational speed and distort music. An inverted twin-bearing design of the platter assembly will further reduce torque-induced drag, whilst double hydraulic insulation offers additional dampening. Time to break open your collection of vinyls, not to mention your bank account!