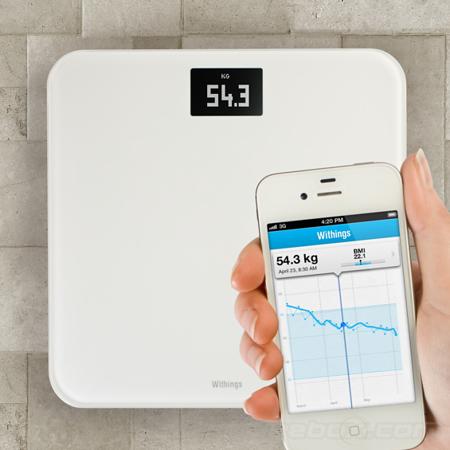 You know something? Back when I was a kid, I never would have figured out the day would come when computers could surf on this thing called the “Internet”, and that we would be toting around wireless devices everywhere we go. Well, I guess things can change a whole lot in just a couple of decades, and it is going to be an exciting ride to be on this train that is gonna ride for a good half decade more, assuming all goes well with my health before I call it quits in the game of life. Still, it amazes me that something as basic as a bathroom scale would be on the receiving end of WiFi connectivity, no? The £99.99 Withings WS-30 WiFi Scales can be said to be a “sequel” of sorts from the original, where it has obviously gone to the fat house and lost some weight, while being faster and looking all the more fabulous – just like you should, when you have shed off all those accumulated pounds over your holiday feasting.

The Withings WS-30 WiFi Scales comes in a tempered-glass and aluminum body that will automatically record your weight, fat mass and BMI (body mass index) each time you step on it. Your efforts (or lack of it, depending on which side of the disciplinary fence you’re on) will be stored on a secure website, social network or smartphone app, allowing you to access such data at any point in time – as long as there is a decent Internet connection around, of course. Do expect this puppy to be able to keep track and store data for as many as eight users simultaneously, where it will rely on previously recorded data to identify each user. I would assume you would not mind sharing your results over a social network if they have been encouraging, but otherwise, it would be best to keep on working at your fitness regime.