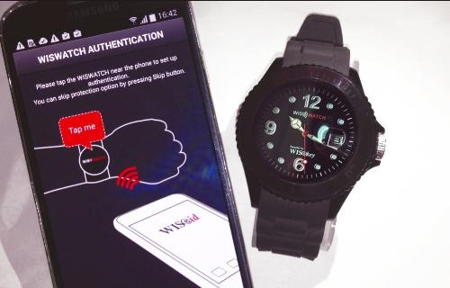 So, you are pretty happy with your smartphone, where the portable communications device itself is full well capable of carrying most of the essential documents that you need for work, and are easily accessible via the cloud as long as you are connected to the Internet – either via your data plan, or through a WiFi network. Having said that, how about ensuring that security on your smartphone is beefed up so that no Tom, Dick or Harry will be able to gain access to it any time that they like? Enter WISeKey and their WIS.WATCH, which happens to be a revolutionary technology mutation that has been created by WISeKey in order to deliver a completely new way of interaction between a human being and a watch. In other words, the watch is now the key to the smartphone.

This is the very first NFC watch of its kind which will send a Secure Digital Identity via NFC to the WISeID app, where it will subsequently activate the login process on the smartphone. Using it is simple – you make use of the WIS.Watch as the KEY for the smartphone, where without the watch the Mobile App with your personal data and cloud access is unable to be used or activated, hence resuting in enhanced security. The WIS.WATCH will connect instantly with your smartphone and launches WISeID so that your Personally Identifiable Information (PII) will be protected. Down the road, you are able to make use of the cryptographic key which is stashed on the watch for other kinds of usage such as activation of your smartphone, unlocking doors and electronic locks at home and at work.