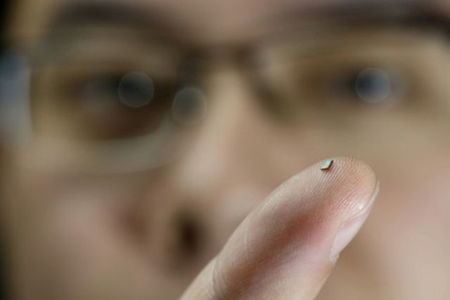 As we carry with us so many different devices these days, it makes perfect sense if these devices were to be able to run just about forever. However, that is far from possible at this point in time as battery technology has yet to progress to such a degree, but it seems that researchers from the Netherlands have taken a small step in the right direction – by working on components first, and their effort has resulted in a wireless sensor which will be able to draw power from a nearby wireless network.

This particular sensor would be as light as a grain of sand, where it can be “painted” into walls so that it can help to monitor temperature, light, movement, or humidity levels. After all, with the Internet of Things making a rapid expansion of its presence, such a sensor would definitely find a place in our future.

This team of researchers at Eindhoven University of Technology in the Netherlands decided that such a wireless temperature sensor will be able to juice itself up via the electromagnetic waves in the air around it. Talk about not only hooking up via Wi-Fi, but getting charged by itself at the same time – ain’t that grand? This sensor measures approximately 0.08” on its side, and will be able to remain powered indefinitely. The only drawback at the moment? It cannot work if the distance between the sensor and the special router is more than two and a half centimeters.

It is interesting to note that this particular sensor will be able to function even when it is located under a layer of paint, plaster, or concrete. In other words, buildings of the future might very well be equipped with a slew of such small temperature, light, or humidity sensors that have been embedded in the walls, paving the way for the building to automatically adjust its own environmental controls based on the occupants’ preferences. Talk about an entire building ending up all the more smart!