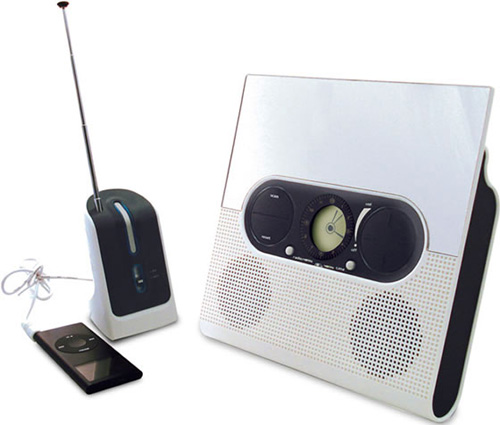 If  you’re not fond of the cases that although do protect your iPod in the shower, it still requires that your iPod be near water, you might like this wireless idea.  With this you can have your music playing in the shower, all the while your iPod is tucked safely away somewhere nice and dry.  Plus for the guys there’s a fogless mirror so you can shave in the shower.   Just mount it to the shower wall and you’ll have an endless supply of music, well at least until the batteries die.

In addition to being able to play music from your iPod, it also has an FM radio.  Which offers you a little more versatility if your iPod doesn’t have enough music on it for your tastes.  While you’re in the shower you can also keep track of the time since there is an LCD clock.  One down side is that having this in the bathroom means anyone can have music in the shower.  Even those that sing painfully off key.  You can purchase the Wireless Bathroom Speaker for £24.95 or about $40.