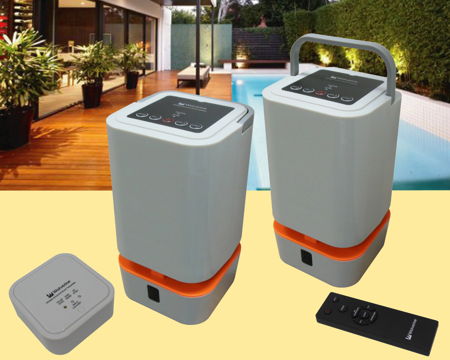 When it comes to portable or wireless speakers, there are dime a dozen models that are out there in the market. The thing is, with so many different models to choose from, which particular one would be worth checking out, especially when one does not have the luxury of time to actually go through a slew of reviews and write-ups? Perhaps you might want to consider the WIOS-5.8, as this claims to be the only wireless speaker system of its kind that will incorporate both standard 5.8 Ghz wireless and Bluetooth technology.

In other words, the WIOS-5.happens to be a portable powerhouse of sound, where it has been specially designed by Wolverine Data. This new set of speakers will be able to work flawlessly regardless of the environment, be it indoors or outdoors. Apart from that, thanks to its sleek form factor, you can be sure that it will play its role well in being an understated stylish component, as it performs equally well if one is celebrating all the way through the night, or should one just be relaxing with a meditative soundscape.

The WIOS-5.8 will arrive with a normal range of 200 feet between transmitter and speakers; and should there be a clear line of sight, it is said that the transmitter will be able to even send audio signals up to 262 feet via 5.8 Ghz wireless, which is far enough to transform a large backyard into an arena of sound. The entire system will also feature a trio of AC power adapters alongside an audio cable so that you can hook up devices to the transmitter via a headphone jack.

The two 10W speakers is part of an expandable system, allowing one to have up to half a dozen additional speakers to easily fill a room or patio with virtual stereo sound. Any takers?