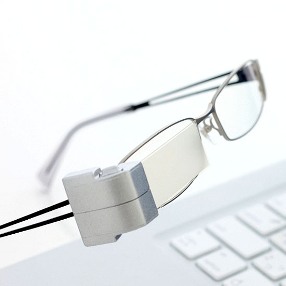 When I first saw the Wink Glasses, I thought they were those joke/novelty glasses that have those weird pictures that change if you tilt them. Yeah, I probably should know the proper name for this technology, but I don’t. I’m also not doing a good job at describing it, but remember those cheap plastic glasses that make you look like you’re winking or blinking?

No, the Wink Glasses are no joke, as they are designed for those who taking gaming too seriously. Did you ever hear of those stories about how video games reduce the player’s blinking ratio, and how it can lead to long-term damage over time?

Well, the Wink Glasses are designed to detect whether the user is blinking and then fogs up the glasses if the user doesn’t blink at the normal five-second mark. I suppose this encourages you to blink, even if it spoils your game.

I’m not certain how long it takes to charge this particular wireless device, but it can apparently hold an eight-hour charge. Of course, if there is an outlet or USB port nearby, the Wink Glasses can always be attached there for power.

If you are interested in the Wink Glasses, then you might have to be in Japan to get them. They won’t hit the market on August 10th for a price of $150.