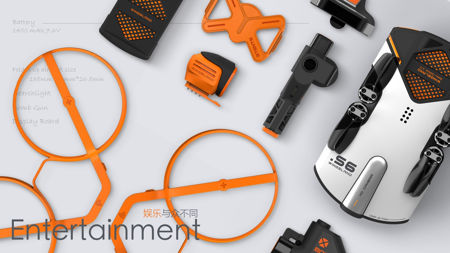 Drones have more or less entered mainstream consciousness for quite some time already, and it does not look as though there is any stopping the drone fever from taking over on a large scale. In fact, there has been drones that arrived in all sorts of shapes and sizes, and the latest model to join the fray would be the Wingsland S6 mini drone. The Wingsland S6 mini drone is touted to be a game changer in the industry, as the most notable aspect of it would be the quartet of foldable motor arms in addition to its extremely thin body design.

The Wingsland S6 mini drone will have a size that is roughly the same as an iPhone 6 Plus in the compact form. In other words, it is a snap to stash away, not to mention tote around. If you would like to capture everything around you, the Wingsland S6 mini drone will do so with a 13MP low distortion camera, which would also provide the S6 with the title of being the world’s thinnest 4K drone. Not only that, it tips the scales at a mere 230 grams — and this is including the battery, with the entire shebang measuring all of just 26.8mm thick, or should we say thin? Surely this would give the Dobby Pocket Drone a run — or a flight for its money.

The Wingsland S6 mini drone will arrive in half a dozen color choices, and it also has one special collaboration design with fashion brand-MLGB. With the S6, one will be able to attach different kinds of functional accessories via the extended port that is located on the upper shell of the S6. The Wingsland S6 will feature a trio of compatible modules for users to choose from: a toy gun, a searchlight and an emoji display screen; while there will be an all-around obstacle avoidance module available down the road. Expect the Wingsland S6 to retail for $350 a pop when it is available shortly down the road.