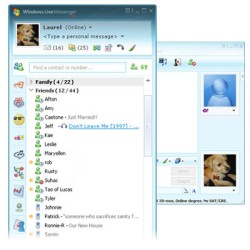 To start with, if you’re living in the moon for the past decade and have no idea what MSN Messenger is all about, I’ll give you an idea by saying that it is a “free instant messaging client for Microsoft Windows”.

In other words, it’s a program that lets you chat with your friends online and do a bunch of other things, similar to the cellphones situation in which the main function (make/receive calls, send/receive sms) has been forgotten; the buzz in this case is on the extra features that can take full advantage of what the internet has to offer, and the interaction between users.

PC-to-PC Talking: Is this something different from the Audio Conversation feature that already exists in MSN 7.5 and other past versions? Maybe they just renamed it, changed the icon, added one or two new things and decided to call it as a new feature, beats me…

Telephone calling: Using the Verizon service you’ll be able to make phone calls to anywhere in the world, there will also be cordless phones (created by Uniden America
and Phillips) made specifically to use with Windows Live Messenger.

Sharing Folders: “Drag and drop a file onto a contact’s name to create a Sharing Folder” – that’s the description that Microsoft provides. But what if I don’t want to share the whole folder? There might be photos on that folder that are too private!

The address book section available in past versions has been developed and renamed to Windows Live Contacts. More information can be displayed and the moment that someone updates their contact info, it will updated on your side too.

Integration with other instant messaging services is being worked on, in the near future you’ll be able to talk to people that user Yahoo! Messenger – a good one finally.

Another “good one” is the inclusion of a new game – Dead Man’s Tale – which is related to the new Pirates of the Caribbean movie.

Don’t sweat it, here it the link to download Windows Live Messenger ;p Take a look at the Overview too.

PS – If it wasn’t for my poor internet connection I would download and try the new version, but I tried twice and was unsuccessful.