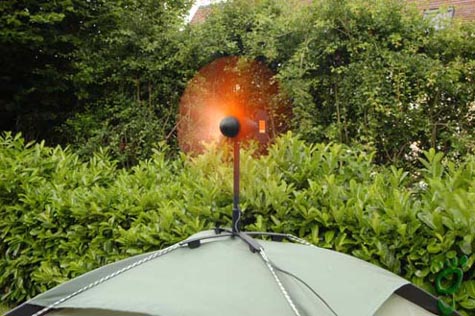 Imagine camping in the wild and an emergency happens. Luckily, you discover you have a cellphone signal! In the wild no less! But the bad news is, you’re battery has just died as you reach 911. Too bad you didn’t have a way wind charge that GPS cellphone so rescue workers could find you.

Well, you have to applaud the effort in creating this wind powered cellphone charger. A mini windmill weighing a feathery 150 grams sits atop your tent.

British company Orange developed the windmill charger with GotWind, whose goal is to provide unique ways to reduce the carbon footprint in everyday life. The basic design of the windmill charger is three fold. The windmill, transfers energy into a control box battery system that can then charge the cellphone itself. Made of the standard horizontal axis wind turbine (HAWT) type, with a blade propeller diameter of 30cm, provides a half watt charge to your cell as the wind blows – which is enough to trickle charge a rechargeable battery and fully charged that cell within a reasonable 1-2 hours.

Granted, a solar powered charger will do just as well, but often the sun is shy behind a cloudy day. Wind has no restrictions, and so this concept has some merit. Now all they need to do is come up with a larger option so you can bring your television and XBox along. Now that’s roughing it.