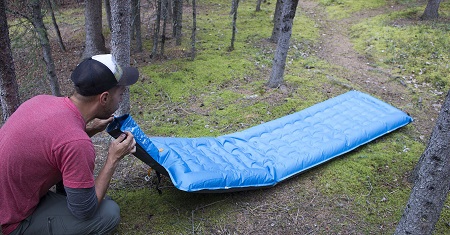 If you go camping in the wilds, you’re acknowledging the fact that you will likely get an uncomfortable night of sleep. We’re so used to our cozy beds and temperature controlled habitats that it’s hard to adjust to whatever mother nature feels like throwing at you for the extent of your trip. If you must have some comfort, a blow-up mattress can help, though it’s quite a pain to inflate and still won’t save you from bugs.

Not only do you have to make yourself light-headed trying to fill it up as quickly as possible, but you also have to stick your mouth on a valve that has been who knows where. When you’re done, there’s also the joyous task of trying to squish all the air out and flatten it enough again to repack it. The Windcatcher won’t be nearly as much of a bother though, as it eliminates most of the previously listed issues through innovation.

This air mattress can be inflated in 2-18 seconds if you can normally blow up an air mattress in about 3 minutes. The Windcatcher AirPad 2 uses a valve that you don’t have to put your lips on, sucks in surrounding air as you blow into it, deflates in no time at all, and has an elastic band built-in with a G-hook that will keep it secured neat and tidy. This mattress will cost you $99.95, and weighs one pound and 14 ounces, so it won’t add much to your pack.

Available for purchase on windcatchergear