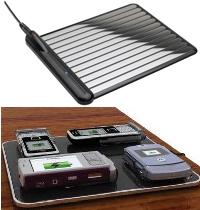 It would appear that the Powermat is winning as far as basic space is concerned. The Wildcharger Pad is an 8″ x 6″ space capable of holding 2 mobile devices, but the company says that it can hold five. That most be with the Wildcharge PowerDiscs. The Powermat can hold about three mobile gadgets.

So I suppose the Wildcharger has the Powermat beat for the number of mobiles. In all honesty, I don’t know a time when I needed to recharge five mobiles at any given time.

Now lets look at aesthetics. I like the Powermat’s look with its ebony black exterior, but the Wildcharger looks like a barbeque grill covered in aluminum foil.

So hey, I’m not going to say which one really “wins” this battle. After all, don’t we usually shun monopolies? Each product can do what it says, and that is what is most important.