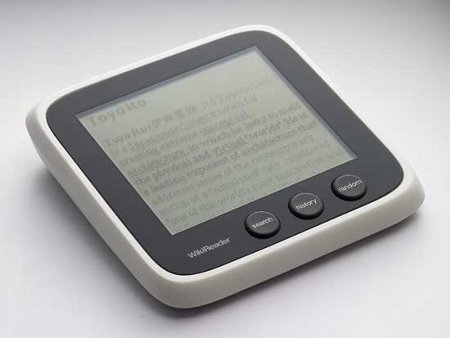 Openmoko’s WikiReader device might resemble a pager, and for some, it could very well share the same status as the pager in this day and age. After all, with many people already being proud owners of a smartphone which allows one to access the Internet any time they please, why would there be a need for a portable version of Wikipedia which is not updated dynamically? Currently, the Openmoko WikiReader palm-sized electronic encyclopedia contains more than 3 million English language Wikipedia articles, but the latest English language version is now equipped with 14 other language versions of Wikipedia including Chinese, Japanese, Portuguese, Norwegian, Greek, French, Finnish, Danish, Dutch, German, Spanish, Welsh, Russian and Hungarian. Apart from that, the virtual keyboards with characters to support them are also thrown in for good measure.

The main reason behind the WikiReader’s existence was belief that people don’t go to Wikipedia because they want to be on the Internet, instead, they end up there as it’s the world’s best resource for finding answers and discovering new questions. WikiReader is more or less “Wikipedia in your Pocket”, although it isn’t updated as often as one would like it (unlike the Internet version). This lightweight device is battery operated, featuring a simple three-button design, a glass touchscreen display and an ergonomic rounded housing which makes it perfect to tote around. With a sophisticated compression technique, the WikiReader is able to store and deliver more than 3 million Wikipedia articles, which would mean there is no need to worry about external connections, additional monthly subscriptions, and Internet connections. A couple of AAA batteries offer enough juice to last for months on end for the average user, and can perform lightning-fast searches if you so desire.

Openmoko hopes to see more people use multiple language Wikis, and have made them available on a microSD memory card format. For example, the Chinese version starts from 32MB while it takes up to 5GB to hold the English language Wikipedia. Currently, the WikiReader supports microSD cards up to 16GB in size. It will cost $69 for a WikiReader with a 4GB microSD card, while an International 8GB version of WikiReader is available at Amazon as well as the company’s own web store for $99.