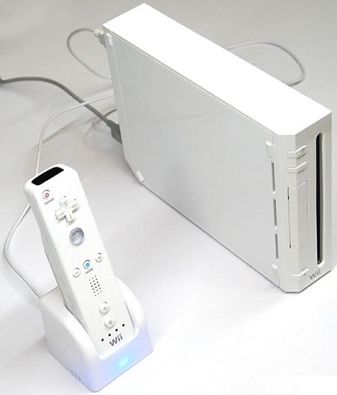 I’ve played the Wii a few times before and it’s a great console. I love the fact that you get Wii Sports with your purchase; it’s a great game to play with family and friends, even those who don’t like video games. Despite it’s mediocre graphics, the Wii will give you hours of fun no matter what. Now, I’ve said a lot of good things so far, but I do have one gripe, which is the use of regular old AA batteries in the Wiimote (the remote control). Rechargeable batteries aren’t a new technology these days, and it’s just silly to have to constantly be buying extra AAs to use in your Wiimotes. It was only a matter of time before a 3rd party came out with a Wiimote charger, and it looks like that time has come with Thanko’s Wiimote USB charger.

The white plastic styling on the charger goes perfectly with your Wii. It even comes complete with some lovely blue LEDs that will let you know when charging is complete, a task that takes about 3.5 hours. To get this thing to work, you’ll need to replace the battery + battery case of your Wiimote. The special case allows the nickel battery to charge itself without having to take the batteries themselves out. For power, any USB port will do, which means you can charge your Wiimote in your computer or, more likely, by using one of the Wii’s 2 USB ports. A complete charge will last you 25 hours of play, and that should be no problem as you can just set it in the cradle whenever you’re not playing and always have a full charge.