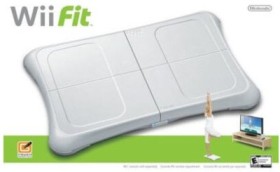 I was surprised to see that Coolest Gadgets hasn’t covered the Nintendo WiiFit yet, so I feel obligated to spread the good news of the WiiFit release date to all of our readers. Nintendo has officially announced that the WiiFit will be released on May 19th.

For those of you who are not familiar with the WiiFit, it is a pressure sensitive balance board that allows users to exercise with aerobic, toning, and balance activities, all “supervised” by a virtual trainer.

Not only will the WiiFit do exercise-based games like push-ups, but there are other games that are fun for all ages. For example, a user can wiggle to a virtual hula hoop or play a soccer goalie who is blocking shots with his or her head. Click on the jump to see a video of its features.

In short, the WiiFit is the best way to get video game players off of the couch since the invention of WiiSports. No doubt Jane Fonda would have sponsored the WiiFit if it had been invented during the time of the Atari 2600.

If you liked what you saw on the video, and can’t wait a few more weeks to lay down the $89.99 for the WiiFit, you can preorder it from Amazon now. You might also enjoy this parody video of the WiiFit. Just watch it and have a few WiiLaughs.