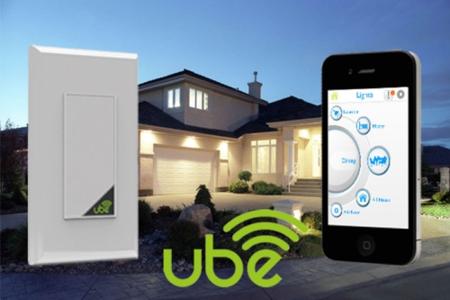 Everyone is talking about going green these days, from the small household all the way to mega large corporations. After all, being green is in, and our planet cannot really take on too much more pollution before it starts to collapse on itself, and we all know just how mother earth is capable of striking back with more than just a vengeance. Well, Demo 2012 People’s Choice winner Ube (pronounced as “yoo-bee”) has just launched something that will bring a smile to the face of environmentalists, being an Indiegogo campaign that hopes to raise support for its Wi-Fi connected Smart Dimmer.

The Smart Dimmer itself was specially designed to control household light circuits as it will function to replace a homeowner’s current light switch or dumb dimmer, hence paving the way or one to experience full control of the lights from the switch or directly from a smartphone app. The dimmer will hook up to the homeowner’s home Wi-Fi router, where it will then be controllable from a smartphone as it remains connected to the local home network or from any internet connection around the world. This means you can still freak your neighbors out when you are halfway around the globe, no?

Ube intends to introduce technology that was specially designed to control a new genre of electronic appcessories, all directly from a free smartphone app. The technology will obviate the need for expensive custom control systems, where it relies on IP communication protocols instead to control of a range of connected home electronics. Depending on your level of comfort, the Smart Dimmers will be priced anywhere from $49 to $69 on Indiegogo, and will feature a host of features that are lacking on other dimmers targeted for home use, such as the ability to communicate with each other so that lights can be controlled across a room or an entire house. You can even set lighting “scenes” such as “party”, “dinner”, “all-on” or “all-off”, and individual dimmers come with sub-metering to report energy usage for each light switch, letting you have greater control when monitoring your lighting bills.

Delivery is tipped for a June 2013 release, so it is time to prepare the missus that you want one of these bad boys!