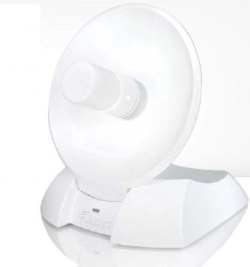 Remember the scene in INDEPENDENCE DAY when Jeff Goldblum places a satellite like dish on the roof of his dad’s car and triangulates the signal of his wife’s cellphone to determine where she was in the White House? His dad asks him how he can do that and he replies “all cable repair men know how to do this, pop.” Well, the Hi-Gain USB Wireless-300N Dish Adapter from Hawking Technologies won’t triangulate a signal in the White House, but it will boost weak WiFi signals in areas where a signal isn’t very strong to begin with. 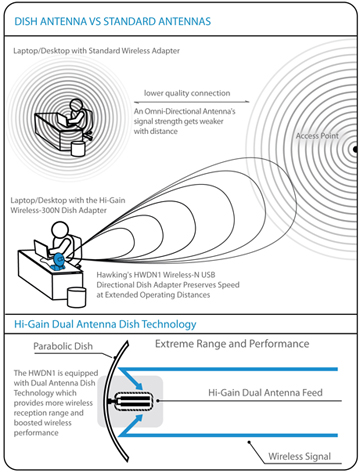 With a supports range of nearly 4,000 feet, this 802.11n capable antenna can extend a wireless network up to six times its range and claims a data throughput 12 times the average for transfer speeds in excess of 300Mbps. IN addition, the 300-N is purely plug and play by USB and is portable. Simply plug the 300N into your laptop, install the included software, and direct the HWDN1 towards a wireless source. The result will be blazing speeds when the only open chair at Starbucks is wrapped around rebar yielding a paltry 1 bar signal.

Just don’t tell those invading aliens we can do that. Otherwise they’ll use our wi-fi signal to cripple our defenses.