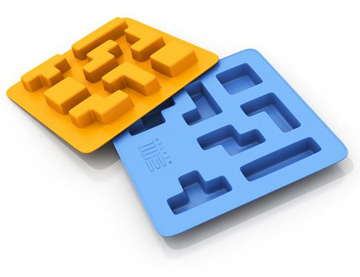 Following on the heals of Lego ice cube trays, a design artist is bandying about the concept of Tetris ice cubes aptly named “Tetrice.” Only in concept at the moment, but the silicon molds would create each official shape of the colossally popular computer game so that cocktails can take on a decidedly more interactive appeal. Toss in some food coloring for accuracy and you have a fun ice cube mold for parties and games. Just make sure you wear gloves to prevent frost bite.

Sadly, this would make for yet another revenue stream that the inventor of Tetris won’t be able to take advantage of. The game was invented in 1985 by a Soviet Computer Scientist named, Alexey Pajitnov while working for the Soviet Academy of Sciences .
And as such, all rights (and profits) were owned by the Soviet State.