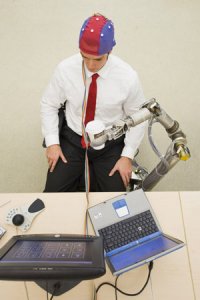 It is pretty heart wrenching to see a great deal of folk these days suffer from severely debilitating syndromes that leave them paralyzed as well as completely dependent on the assistance of others. Good thing medical science have advanced by some degrees, and among these include automated wheelchairs that allow such folks unprecedented freedom to move around on their own, gaining back their self-respect and esteem in the process. When it comes to assistive technology, researchers from the University of South Florida are pushing the proverbial envelope even further by working on a wheelchair that has its own mechanical arm. What makes this special is the wheelchair’s ability to hold a system that relies on EEG, reading the user’s brain waves while sending translated signals to the robotic arm to move it accordingly. Man and machine working together telepathically? I’m sold.

Initial testing by human users has successfully proven that the WMRA control system can be used without having the user to use even a single muscle. The WMRA also will not use any pre-programmed movements unless chosen by the user beforehand. Rajiv Dubey, professor and chair of the USF Department of Mechanical Engineering, and director of the Center for Rehabilitation Engineering & Technology, has mentioned in passing that such a design (in the field of intelligent therapeutic and assistive robotic systems such as the WMRA) is based on sensor-fusion technology, which is utilized to map limited human input into complex motion via a method known as “sensor-assisted scaled teleoperation.”

The WMRA will seem like a heaven-sent device that will help folks suffering from “locked-in syndrome,” an entirely paralytic condition that leaves people unable to move despite maintaining a normal standard of intellectual standards. We hope that the WMRA will be made available to all soonest possible at the lowest price, although the latter will be almost impossible to achieve.