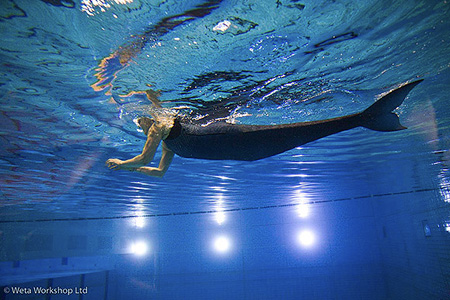 I am certain that you have heard of Weta Workshop before, they are the group responsible for the special effects for The Lord of the Rings and The Chronicles of Narnia movies.
They also did the effects for that live action Peter Pan film that involved mermaids. In the film, they created tails for actresses, and now they have created this fully functional mermaid tail for a double leg amputee.
The amputee, Nadya Vessey, was once at the pool one day and a little child saw her with her prosthetic legs. The child asked her a lot of questions, and she jokingly referred to herself as a mermaid. This gave her an idea, and she consulted Weta Workshop’s prosthetic department to make the mermaid tail. You can check it out on the video after the jump.
You can see that they gave Nadya a “mermaid makeover”, and she was able to swim quite well in the pool. Not to be too much of a spoiler, but she can apparently swim “under the sea” as well.
I see a fad growing of aquatic cosplay where people who are not amputees will be donning the fins like a reverse version of The Little Mermaid. Hey, if someone were to invite me to go “fin swimming”, I suppose that I would do it. However, it seems a little girly. Unless you are a “Mer-man”, like Derek Zoolander.