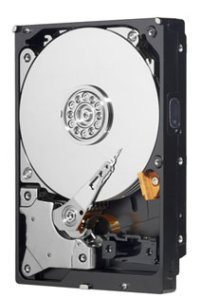 Guess you can’t really have enough storage space in this world, eh? I remember when I was at my cousin’s house back in the 1980s, he has an XT computer running on an Intel 8086 processor with a 2MB hard drive (!), and boy did I have plenty of fun dishing out punishment on zombies in Dungeons & Dragons’ Champions of Krynn RPG in full CGA glory. Those were the good old days all right – fast forward a couple of decades or so and you have Western Digital offering the first 2TB hard drive in the world. That is an improvement of 1,000,000 times, which is impressive, to say the least. This new 3.5″ 2TB hard drive is part of the environmentally friendly WD Caviar Green hard drive family and is based on WD’s 500 GB/platter technology (with 400 Gb/in2 areal density) with 32 MB cache.

What do you think of such large capacities found in hard drives? Mark Geenen, President of Trend Focus, has this to say, “While some in the industry wondered if the end consumer would buy a 1 TB drive, already some 10 percent of 3.5″ hard drive sales are at the 1 TB level or higher, serving demand from video applications and expanding consumer media libraries. The 2 TB hard drives will continue to satisfy end user’s insatiable desire to store more data on ever larger hard drives.”

The new WD Caviar Green 2TB hard drive is not all about space, as it features a fair number of advanced technologies that will help enhance the speed, capacity and performance of WD’s Caviar Green 1.5TB and 2TB hard drives including StableTrac that helps secure the motor shaft at both ends to reduce system-induced vibration and stabilize platters for accurate tracking during read and write operations; IntelliPower that helps fine-tune the balance of spin speed, transfer rate and caching algorithms which results in significant power savings and solid performance. Last but not least there is IntelliSeek that calculates optimum seek speeds for lower power consumption, noise, and vibration. Pricing has been set at $299 for the WD Caviar Green 2TB hard drive.