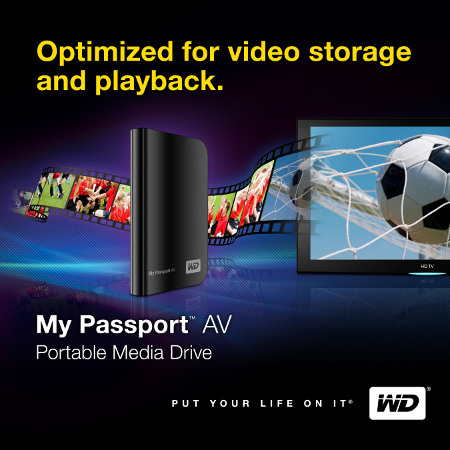 Western Digital is back with a new My Passport AV portable media drive, where this model was built specially for video storage and playback, capable of delivering a plug-and-play experience for digital media enthusiasts. It will come in just one size so that you won’t need to worry about choosing between various capacities? After all, it isn’t exactly terribly expensive with 320GB of storage space compared to a few years ago, as the Western Digital My Passport AV portable media drive will retail for a mere $104.99 which makes it highly affordable. More details on this highly versatile portable media drive right after the jump.

After all, there is a fast growing number of game consoles, camcorders, TVs, DVRs, Blu-ray players and media players (which includes the WD TV Media Player family, of course) that enables consumers to hook up a USB drive and play the multimedia content straight from the drive on an HD TV without the need to go through the traditional computer middleman. Meant to meet the requirements of this demanding video streaming environment, the My Passport AV portable media drive is capable of delivering the formatting and low-power consumption which assures out-of-the-box compatibility with many leading CE (consumer electronics) devices.