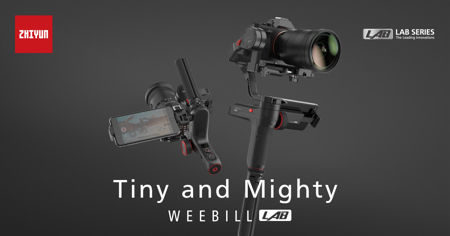 Zhiyun Tech might not be a household name at this point in time, but the company is certainly going places. Their latest release is the WEEBILL LAB stabilizer that was specially developed for mirrorless cameras. The name might sound rather curious at first, but it has been christened as such after Australia’s smallest songbird, where it offers a light, compact and nimble stabilizer body that’s filled with features while delivering top-notch performance in a manner that is similar to its avian namesake.

For those who have a strong interest in making films, Zhiyun Tech understands that you want something that is natural enough to use while being easy to control, and the WEEBILL LAB delivers these capabilities. This high-quality aluminum tripod can be folded in order to hold the WEEBILL LAB as a traditional vertically-held stabilizer, while boasting of the option to be snapped on the horizontal part of the body in a jiffy in order to offer a more natural horizontal grip. Either way, you will be able to also obtain perfect for underslung shots or have a steady two hand grip.

This all-new professional stabilizer works great for mirrorless digital cameras, as long as they do not tip the scales at more than 3kg. With a lightweight body form factor, a versatile design, great control, and action-oriented design, you can be sure that your next photoshooting session will be more fun and perhaps more adventurous. The engine itself is 50% smaller, and yet it is able to deliver 80% more power compared to other stabilizers in its class.

A single charge of the WEEBILL LAB will allow it to run for up to 10 hours, making it more than enough to handle a full day’s work without requiring a trip to the nearest power outlet. In addition, it is also able to charge the camera that is installed on it, although that would then reduce its operating hours.