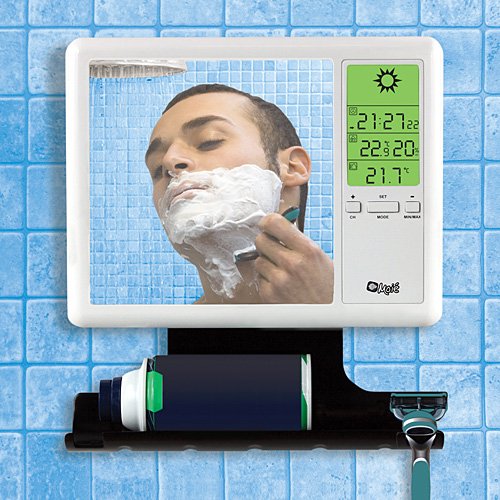 I’ve probably mentioned several times before that I have a lot of appreciation for weather stations as well as combination gadgets that simplify your life.  Well this mirror might be a great gadget to have around for those of you guys out there that like to shave in the shower.  It’d be nice if not only did this have the mirror, but a radio built into it as well so this might be a replacement for your shower speaker.  Instead though, they opted to put a weather station within your shower.  While you’re shaving, you’ll know exactly what it’s like outside.

Personally, a weather station being in the shower wouldn’t quite work for me.  That is since I always pick out my clothing for the day before I even get in the shower.  However, if you do that afterward then this would work out nicely.  It tells you the time, date, temperature, humidity and the daily forecast based on barometric pressure.  It also has a spot to hold your shaving cream and two different razors.  To hold it up it uses suction cups and requires 2 AA batteries as well as 2 AAA batteries.  You can purchase it for $49.98 from Taylor Gifts.