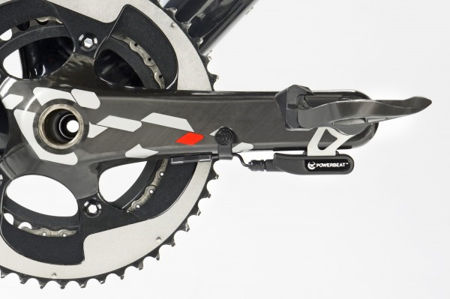 The PowerBeat from Watteam happens to be the very first add-on, professional-grade power meter that is available to the masses – and without requiring them to break the bank, too, as it comes with an asking price of $499 a pop. This particular package will include both a left and right power meter. The tiny, non-intrusive PowerBeat will be able to offer riders with normalized, average and maximum power data in addition to exact cadence. Cyclists will find this easy do-it-yourself solution to be a boon, as PowerBeat works on hollow aluminum cranks, regardless of the year or make, with an aluminum and carbon-compatible version set to release in 2016. It is perfect for road cycling, so that the PowerBeat delivers reliable data regardless of the environmental condition, and will independently deliver both right and left leg force measurements.

If you are a serious cyclist who would like to give your bicycle a boost in terms of hardware upgrades, then the PowerBeat would be a decent candidate. Those who would like to book their PowerBeat can do so through an online registration process – but do bear in mind that this is limited to just those who live in the US. Shipping has been slated to happen at the end of this year. Just how does the PowerBeat work? Well, it will make use of advanced strain gauge measurement technology in order to detect power output as well as to provide users with precise, accurate and consistent data. It will be built from rods and springs, tipping the scales at a mere 24 grams on each side, in addition to a pair of patented mechanical sensors that are attached to both crank arms, a sense pedal stroke up to the millisecond and being able to record the direct and immediate torque applied.

This particular sensor will then feed the data to PowerBeat’s patented algorithm, which is tucked away within the comp units, where it will then be translated to accurate power data. The comp unit will also transmit the data via ANT+ or low power Bluetooth (BLE) to a compatible connected smartphone or cycling computer, which would allow live tracking of a rider’s energy output. The PowerBeat also boasts of universal software compatibility, and the PowerBeat app will be free for iOS and Android users. Best of all is, it is easily installed by yourself.