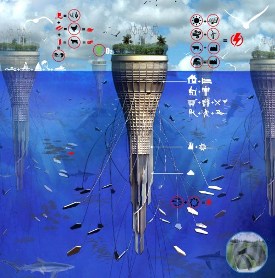 It is an attempt at making a skyscraper underwater, but I think we can emphasize the word “scrape”. After all, those weird tentacles that come out of this structure look like they are “scraping” the water. From what I have read, it sounds like these tentacle things are there to harness the power of wave energy as well as balancing out the structure itself.

Not only does it have a self-contained energy source, but this structure could probably get food from fish and gardens. In short, I could live here, and that whole Waterworld scenerio wouldn’t have to happen. And if it did, then my home would slowly float up, and I probably would not notice if the ice caps melted slowly enough.

This Water-Scraper is the recipient of a Special Mention from the 2010 Skyscraper Competition from eVolo. If nothing else, then I think the creator of this deserves the Grand Prize, and some company who is willing to build this superstructure. I don’t know when we would possibly see this in real life, but I’m thinking sometime way in the future, hopefully not out of necessity.